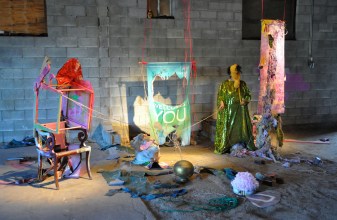 Fort City is a fully-operating city in Flux Factory, Long Island City, Queens County, New York City, United States constructed 90% from salvaged bed sheets, fabric and materials from MFTA and the pay-per-pound Goodwill in VanDam Street. The projected 2018 population census is expected to be 54 3⁄4. The City includes a post office, movie theater, diner, public library, school, hospital, general store, houses, and a town hall. Fort City will be fully operating with each area open to the public for screenings, games, readings, classes, general sales, etc. There will also be a school prom in the Town Hall, complete with prom photo booth.

“Immigrant Ball” is a participatory performance event, in which several performers, all first generation immigrants of diverse backgrounds, invite the audience to the extravagantly DIY Ball, during which the city on site will be gradually destroyed through choreographed debauchery. Allowed to misbehave, the immigrants take over the territory; claiming their place, ready to begin again, to renew, to reimagine through their own lenz, reversing the dominant cultural narrative in the process.

Copyright Flux Factory. 2022 - All Rights Reserved - Login to Fluxipedia
Back To Top